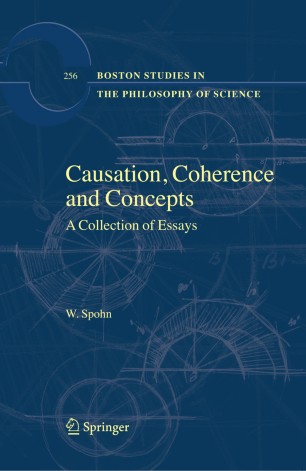 A Collection of Essays

Part of the Boston Studies in the Philosophy of Science book series (BSPS, volume 256)

In this collection I present 16 of my, I feel, more substantial papers on theoretical philosophy, 12 as originally published, one co-authored with Ulrike Haas-Spohn (Chapter14), one (Chapter 15) that was a brief conference commentary, but is in fact a suitable appendix to Chapter 14, one as a translation of a German paper (Chapter 12), and one newly written for this volume (Chapter 16), which, however, is only my recent attempt to properly and completely express an argument I had given in two earlier papers. I gratefully acknowledge permission of reprint from the relevant publishers at the beginning of each paper. In disciplinary terms the papers cover epistemology, general philosophy of science, philosophy of language, and philosophy of mind. The section titles Belief, Causation, Laws, Coherence, and Concepts and the paper titles give a more adequate impression of the topics dealt with. The papers are tightly connected. I feel they might be even read as unfolding a program, though this program was never fully clear in my mind and still isn’t. In the Introduction I attempt to describe what this program might be, thus drawing a reconstructed red thread, or rather two red threads, through all the papers. This will serve, at the same time, as an overview over the papers collected.

Wolfgang Spohn, born 1950, is one of the most distinguished analytic philosophers and philosophers of science of Germany, editor-in-chief of Erkenntnis for more than 13 years, author of two books and more than 60 papers covering a wide range: epistemology, metaphysics, and philosophy of science, philosophical logic, philosophy of language and mind, and the theory of practical rationality. This collection presents 15 of his most important essays on theoretical philosophy. The centre piece is his uniquely successful theory of the dynamics of belief, tantamount to an account of induction and nowadays widely acknowledged as ‘ranking theory’. Like any account of induction, this theory has deep implications ingeniously elaborated in the papers included. They cover an account of deterministic and also probabilistic causation, initially subjectively relativized, but then objectivized in a projectivistic sense, and an account of explanation and of strict, of ceteris paribus, and of chance laws. They advance a coherentist epistemology, though giving foundationalist intuitions their due, and establish some coherence principles as a priori true, entailing even a weak principle of causality. They finally shed light on concept formation by more broadly embedding the epistemological considerations into the framework of two-dimensional semantics. All this is carried out with formal rigor when feasible.