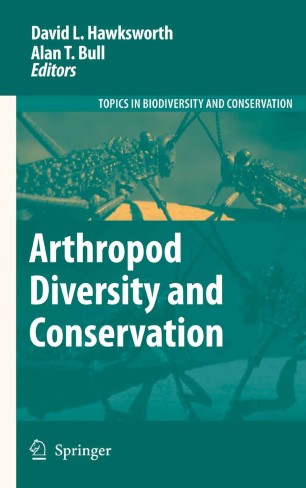 Part of the Topics in Biodiversity and Conservation book series (TOBC, volume 1)

Despite their enormous bulk and complexity of architecture, plants make up only around a quarter of a million of the 8 million or so species on Earth. The major components of biodiversity, instead, are the smaller, largely unseen, silent majority of invertebrates – most of which are arthropods. Vertebrates, a mere blip on the biotic horizon, are elevated in importance in the bigger scheme of things only by the human psyche.

This collection of more than 30 peer-reviewed papers focuses on the diversity and conservation of arthropods, whose species inhabit virtually every recess and plane – and feature somewhere in virtually every food web – on the planet. Highlighting issues ranging from large-scale disturbance to local management, and from spatial heterogeneity to temporal patterns, these papers reflect some of the most exciting new research taking place today – and in some of the most biodiverse corners of the planet.

Edited by David Hawksworth and Alan Bull, with a preface by Michael J Samways, this book will provide a valuable reference to anyone interested in the diversity and conservation of arthropods.

Reprinted from Biodiversity and Conservation 15:1 (2006), excluding the paper by R. O'Malley et al., The diversity and distribution of the fruit bat fauna (Mammalia, Chiroptera, Megachiroptera) of Danjugan Island, Cauayan, Negros Occidental, Philippines (with notes on the Microchiroptera), pp. 43-56.