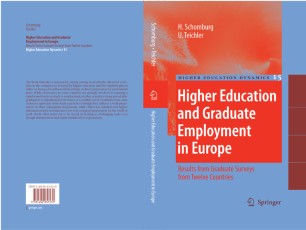 For the first time, a major international comparative study was undertaken providing detailed information on the employment and work situation of graduates from higher education institutions in a large number of countries. With the help of a questionnaire survey more than 40,000 graduates from 12 countries reported about their study experiences, the transition from Higher Education to employment and their early career up to four years after graduation. The interviewees from Austria, the Czech Republic, Finland, France, Germany, Italy, the Netherlands, Norway, Spain, Sweden, the United Kingdom and Japan are a unique source of information on Higher Education and graduate employment in Europe.

The book indicates a noteworthy variety among economically advanced countries in the competences fostered by Higher Education and the emphasis placed either on laying a broad basis of knowledge or direct preparation for professional tasks. While universities in some countries are strongly involved in ensuring a rapid transition from study to employment, in other countries a long period after graduation is widespread for the search of a suitable career. Graduates from some countries appreciate their study experiences though they criticize a weak preparation for their subsequent assignments, while others less satisfied with higher education in their retrospective view note a satisfying preparation for the world of work. Study often turns out useful to lead to challenging tasks even though remuneration and status remain below expectations.

'The results of this project are extensive, interesting and important'

"The results of this project are extensive, interesting and important" (Professor John Brennan, Centre for Higher Education Research and Information, London, UK)