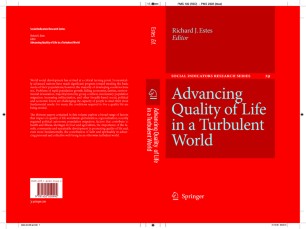 Advancing Quality of Life in a Turbulent World

Environmentalissuescontinuedtoloomlargeinthelastdecadeofthetwentiethc- tury,especiallyenvironmentalproblemsrelatedtorisinglevelsofCO emissionsand 2 other greenhouse gases on the planet’s average temperatures and, subsequently, storm patterns. Floods and droughts, in combination with unseasonably high and low temperatures became the norm rather than the exception for large expanses of Africa,Asia and Oceania. Even large areas of Europe and NorthAmerica were s- jected to recurrent floods and droughts and experienced unseasonable extremes of hot and cold temperatures associated with man-made intrusions into the natural environment. And,still,aglobalplanofactiontohaltman-relatedpatternsofdef- estation, desertification, and over-fishing of the seas has yet to come into being. At the same time, the number of regional conflicts and civil wars increased and, with them, the lives of many women, children, old people and other n- combatants were lost in these conflicts. Increasingly, regional wars and conflicts had less to do with disputes over land or other natural resources but more with the differing social, political and religious identifications of the people engaged in these conflicts. Warnings of genocide and near-genocide conditions were commonly proclaimed to the world community but, sadly, the planet’s inter- tional security apparatus proved to be largely ineffective in containing many of the worst of these atrocities. As a result, hundreds of thousands of people, ev- tually millions, died while awaiting assistance from the global community to bring an end to their suffering.