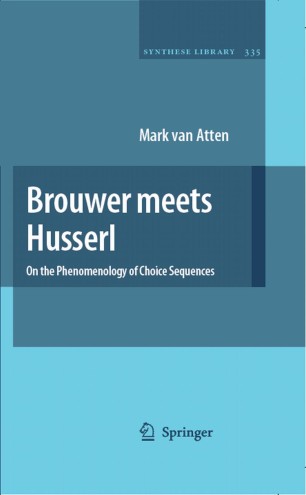 On the Phenomenology of Choice Sequences

Can the straight line be analysed mathematically such that it does not fall apart into a set of discrete points, as is usually done but through which its fundamental continuity is lost? And are there objects of pure mathematics that can change through time?

This book aims to provide a sound philosophical basis for Brouwer's choice sequences by subjecting them to a phenomenological critique in the style of the later Husserl.

"It is almost as if one could hear the two rebels arguing their case in a European café or on a terrace, and coming to a common understanding, with both men taking their hat off to the other, in admiration and gratitude. Dr. van Atten has convincingly applied Husserl's method to Brouwer's program, and has equally convincingly applied Brouwer's intuition to Husserl's program. Both programs have come out the better." Piet Hut, professor of Interdisciplinary Studies, Institute for Advanced Study, Princeton, U.S.A.