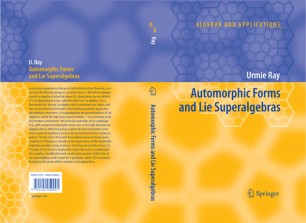 Part of the Algebra and Applications book series (AA, volume 5)

A principal ingredient in the proof of the Moonshine Theorem, connecting the Monster group to modular forms, is the infinite dimensional Lie algebra of physical states of a chiral string on an orbifold of a 26 dimensional torus, called the Monster Lie algebra. It is a Borcherds-Kac-Moody Lie algebra with Lorentzian root lattice; and has an associated automorphic form having a product expansion describing its structure. Lie superalgebras are generalizations of Lie algebras, useful for depicting supersymmetry – the symmetry relating fermions and bosons. Most known examples of Lie superalgebras with a related automorphic form such as the Fake Monster Lie algebra whose reflection group is given by the Leech lattice arise from (super)string theory and can be derived from lattice vertex algebras. The No-Ghost Theorem from dual resonance theory and a conjecture of Berger-Li-Sarnak on the eigenvalues of the hyperbolic Laplacian provide strong evidence that they are of rank at most 26.

The aim of this book is to give the reader the tools to understand the ongoing classification and construction project of this class of Lie superalgebras and is ideal for a graduate course. The necessary background is given within chapters or in appendices.

"The aim of this book is to present the very active theory of Borcherds-Kac-Moody Lie algebras and of G-graded vertex algebras at a level accessible to graduate students and mathematicians from other fields. An introduction of this type is certainly very desirable … . The author of this review, being a mathematician from a different field … may be a good test person for this book. I like the concept of the book … ." (Rainer Schulze-Pillot, Mathematical Reviews, Issue 2008 e)