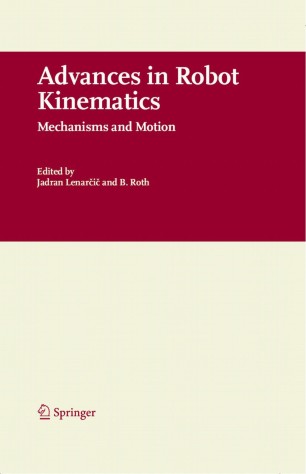 This is the tenth book in the series of Advances in Robot Kinematics. Two were produced as workshop proceedings, Springer published one book in 1991 and since 1994 Kluwer published a book every two years without interruptions. These books deal with the theory and practice of robot kinematics and treat the motion of robots, in particular robot manipulators, without regard to how this motion is produced or c- trolled. Each book of Advances in Robot Kinematics reports the most recent research projects and presents many new discoveries. The issues addressed in this book are fundamentally kinematic in nature, including synthesis, calibration, redundancy, force control, d- terity, inverse and forward kinematics, kinematic singularities, as well as over-constrained systems. Methods used include line geometry, quat- nion algebra, screw algebra, and linear algebra. These methods are - plied to both parallel and serial multi-degree-of-freedom systems. The results should interest researchers, teachers and students, in ?elds of engineering and mathematics related to robot theory, design, control and application. All the contributions had been rigorously reviewed by independent reviewers and ?fty three articles had been recommended for publi- tion. They were introduced in seven chapters. The authors discussed theirresultsatthetenthinternationalsymposiumonAdvancesinRobot Kinematics which was held in June 2006 in Ljubljana, Slovenia. The symposium was organized by Jozef Stefan Institute, Ljubljana, under the patronage of IFToMM - International Federation for the Promotion of Mechanism and Machine Science.