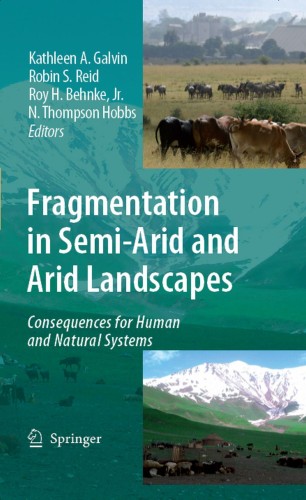 Fragmentation in Semi-Arid and Arid Landscapes

Consequences for Human and Natural Systems

The global significance of the world’s rangelands is large, with these arid and semi-arid systems making up almost 25% of the earth’s landscapes – and supporting the livelihoods of more than 20 million people. These ecosystems are also home to several of the planet’s remaining megafauna, as well as other important species. Yet fragmentation across these rangelands has significantly impaired the ability of both people and animals to compensate for temporal heterogeneity in vegetation and water by exploiting its spatial heterogeneity, resulting in limited resource availability.

The case is developed that while fragmentation arises from different natural, social and economic conditions worldwide it creates similar outcomes for human and natural systems. With information from nine sites around the world the authors examine how fragmentation occurs, the patterns that result, and the consequences of fragmentation for ecosystems and the people who depend on them. The book will provide a valuable reference for students and researchers in rangeland ecology, park and natural resource management, environmental and ecological anthropology, economics and agriculture.