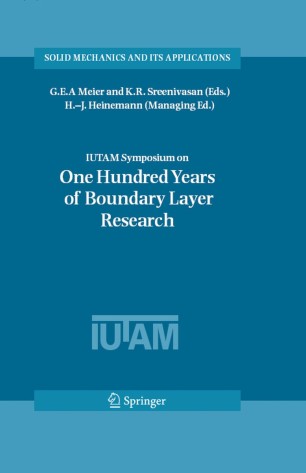 IUTAM Symposium on One Hundred Years of Boundary Layer Research

Proceedings of the IUTAM Symposium held at DLR-Göttingen, Germany, August 12-14, 2004

Part of the Solid mechanics and its applications book series (SMIA, volume 129)

Prandtl’s famous lecture with the title “Über Flüssigkeitsbewegung bei sehr kleiner Reibung” was presented on August 12, 1904 at the Third Internationalen Mathematischen Kongress in Heidelberg, Germany. This lecture invented the phrase “Boundary Layer” (Grenzschicht). The paper was written during Prandtl’s first academic position at the University of Hanover. The reception of the academic world to this remarkable paper was at first lukewarm. But Felix Klein, the famous mathematician in Göttingen, immediately realized the importance of Prandtl’s idea and offered him an academic position in Göttingen. There Prandtl became the founder of modern aerodynamics. He was a professor of applied mechanics at the Göttingen University from 1904 until his death on August 15, 1953. In 1925 he became Director of the Kaiser Wilhelm Institute for Fluid Mechanics. He developed many further ideas in aerodynamics, such as flow separation, base drag and airfoil theory, especially the law of the wall for turbulent boundary layers and the instability of boundary layers en route to turbulence. During the fifty years that Prandtl was in the Göttingen Research Center, he made important contributions to gas dynamics, especially supersonic flow theory. All experimental techniques and measurement techniques of fluid mechanics attracted his strong interest. Very early he contributed much to the development of wind tunnels and other aerodynamic facilities. He invented the soap-film analogy for the torsion of noncircular material sections; even in the fields of meteorology, aeroelasticity, tribology and plasticity his basic ideas are still in use.