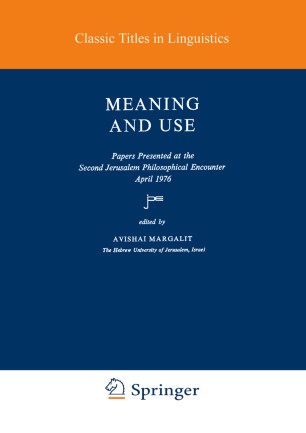 The second Jerusalem Philosophical Encounter was held in Jerusalem on April 25-28, 1976. The symposium was originally planned to celebrate the 60th birthday of Y ehoshua Bar-Hillel, philosopher and friend. But his sudden death intervened, and turned celebration into commemoration. The topic of the symposiumwas Meaning and Use. For Bar-Hillel, the question 'meaning or use?' was of great importance, one which he took as a question of priorities. Which approach to natural language is prior: the formal, semantical approach, which accords a central position to the truth­ functional concept of meaning and to the theory of reference, or rather the alternative approach which accords the central position to linguistic commu­ nication and prefers dealing with speech acts to dealing with Statements? Bar­ Hillel's answer to this question, in his later years, can be summed up by our title, meaning and use: neither approach deserves priority, each is equally necessary, and they both complement each other. Those familiar with Bar­ Hillel's uncompromising intellectual honesty would know that this answer does not reflect a superficial wish for domestic peace, but stems rather from deep and informed convictions. The issues of meaning and use dominated Bar-Hillel's intellectuallife. At the same time his day-to-day existence was guided by the idea that the meaning of life is to be found in being useful, particularly in being useful to the community of seekers of knowledge.