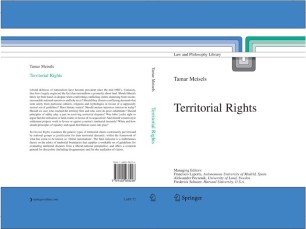 Liberal defences of nationalism, prevalent since the mid-1980’s, have largely neglected the fact that nationalism is primarily about land. Territorial Rights examines the generic types of territorial claims customarily put forward by national groups as justification for their territorial demands, within the framework of what has come to be known as ‘liberal nationalism’.

"When it appeared in 2005, Territorial Rights filled a void in liberal nationalist theory. In this second edition, Meisels carries her subtle and systematic thinking on the topic further, in part by deftly and constructively responding to the literature that the first edition spawned."
Allen Buchanan, Duke University, USA

"The question of who is entitled to exercise jurisdiction over which land is of fundamental theoretical and practical importance.  It has, however, been neglected by contemporary political philosophers.  In her thoughtful and stimulating work, Territorial Rights, Tamar Meisels provides a much needed analysis of the normative issues involved.  Territorial Rights is a comprehensive, rigorous and illuminating analysis.  It provides both an evaluation of competing philosophical perspectives and a defence of a liberal nationalist perspective on territory.  In doing so it includes instructive discussions of the implications of Locke's political thought for territorial rights, and the continuing relevance of historic injustices.  It would be of interest to anyone interested in questions of territorial rights (and indeed anyone interested in issues of global justice more generally)."
Simon Caney, Magdalen College, Oxford, UK

"Even the most cursory reading, of the burgeoning literature on global distributive justice and just war, reveals a growing appreciation of the foundational role that territorial rights must play in constructing a coherent theory of what nations owe to one another. Tamar Meisels provides us with a challenging, comprehensive, and highly original analysis of how such rights are constituted and the conditions under which they can be justified. Those, like myself, who have advanced a purely individualistic view of the basis of territorial rights, will have to do some serious grappling with her many powerful arguments if they are successfully to sustain that view."
Hillel Steiner FBA, University of Manchester, UK