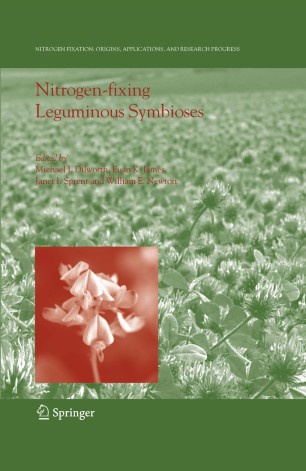 This book is the self-contained final volume of a comprehensive seven-volume series covering the basic and applied science relating to nitrogen fixation. It addresses the most important nitrogen-fixing symbiosis of all – that between legumes and their root-nodule bacteria – and therefore deals with the properties and behaviour of both macro- and micro-symbiont. The coverage is comprehensive, beginning with the extent of the symbiosis and how it may have arisen in the geological past. It considers how legumes select the root-nodule bacteria they allow to form nodules on their roots and the intricate series of signals to be exchanged between legume and bacteria for infection to occur. The immense progress in understanding the genetic systems in the bacteria necessary for nodulation is now being replicated in a rapidly increasing understanding of the required systems in the legumes. The cell biology of the processes of both infection and nodule development is analysed and leads to a parallel assessment of the biochemical processes in carbon and nitrogen metabolism required for successful nitroogen fixation by the symbiotic bacteroid. Attention is given to the ways in which the nodule has solved the conundrum of providing enough O2 for energy generation to drive nitrogen fixation without either inactivating the O2-sensitive nitrogenase or creating damaging reactive oxygen species. This volume also covers the basic physiology of the variety of root-nodule bacteria infecting legumes, as well as looking at the renewed controversy about the chemical form(s) of nitrogen exported to the legume. Successful exploitation of the legume symbiosis in agriculture, horticulture, and forestry demands an understanding of the ecology of the root-nodule bacteria – particularly what makes for a successful inoculant strain for legume introduction to agricultural systems. Then, there is a requirement for inoculation technology to both successfully deliver viable bacteria to the root surface and facilitate nodulation. These practical aspects are thoroughly covered in this volume, with a final chapter assessing how the massive amount of recent information can be exploited in matching host and microsymbiont for the wide variety of environments in which they are needed in our production systems.