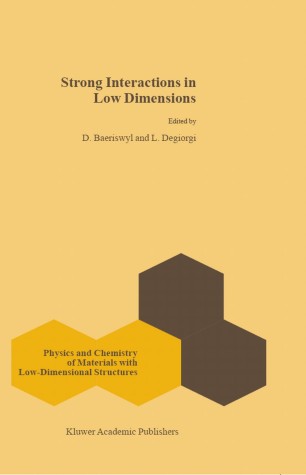 Part of the Physics and Chemistry of Materials with Low-Dimens book series (PCMALS, volume 25)

This book provides an attempt to convey the colorful facets of condensed matter systems with reduced dimensionality. Some of the specific features predicted for interacting one-dimensional electron systems, such as charge- and spin-density waves, have been observed in many quasi-one-dimensional materials. The two-dimensional world is even richer: besides d-wave superconductivity and the Quantum Hall Effect - perhaps the most spectacular phases explored during the last two decades - many collective charge and spin states have captured the interest of researchers, such as charge stripes or spontaneously generated circulating currents.

The Editors' aim is to thoroughly explain a number of selected topics: the application of dynamical probes, such as neutron scattering, optical absorption and photoemission, as well as transport studies, both electrical and thermal. Some of the more theoretical chapters are directly relevant for experiments, such as optical spectroscopy, transport in one-dimensional models, and the phenomenology of charge inhomogeneities in layered materials, while others discuss more general topics and methods, for example the concept of a Luttinger liquid and bosonization, or duality transformations, both promising tools for treating strongly interacting many-body systems.