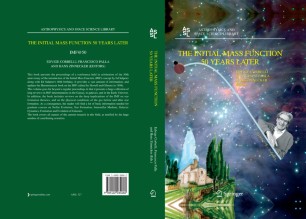 The Book contains the proceedings of a Conference intended to celebrate the 50th anniversary of the introduction of the IMF concept by Ed Salpeter along with Ed Salpeter's 80th birthday.
It summarizes a vast amounts of information, and updates the Herstmonceux book on the IMF,(eds. Howell and Gilmore, 1998 - ASP publ).
The book collects many long reviews on IMF determinations in the Galaxy, in galaxies, and in the Early Universe as well as deep implications of the IMF on star formation theories and on the physical conditions of the gas before and after star formation. It provides basic information needed for the coverage of these important quantities in graduate courses of Stellar Evolution, Star Formation, Interstellar Medium, Galactic Dynamics, Formation and Evolution of Galaxies.
The book covers all aspects of the current researches in this field, as testified by the large number of contributing scientists.