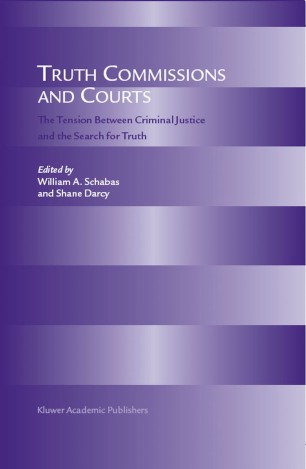 The Tension Between Criminal Justice and the Search for Truth

Criminal justice for human rights abuses committed during periods of political repression or dictatorship is one of the great challenges to post-con?ict societies. In many cases, there has been no justice at all. Sometimes serious political concerns that e?orts at accountability might upset fragile peace settlements have militated in favour of no action and no accountability. In many cases, the outgoing tyrants have conditioned their departure upon a pledge that there be no prosecutions. But thinking on these issues has evolved considerably in recent years. Largely driven by the view that collective amnesia amounts to a violation of fundamental human rights, especially those of the victims of atrocities, attention has increasingly turned to the dynamics of post-con?ict accountability. At the high end of the range, of course, sit the new international criminal justice institutions: the ad hoc tribunals for the former Yugoslavia and Rwanda, the Special Court for Sierra Leone, the various ‘‘hybrid’’ tribunals in Kosovo, East Timor and Cambodia, and the new International Criminal Court. But in terms of sheer numbers, the most signi?cant new institutions are truth and reconciliation commissions. Of va- able architecture, depending upon the prerogatives of the society in question and the features of the past con?ict, they have emerged as a highly popular mechanism within the toolbox of transitional justice. In some cases, the truth commission is held out as an alternative to criminal justice.

Shane Darcy is a research associate at the Irish Centre for Human Rights at the National University of Ireland, Galway, from where he holds an LL.M in International Human Rights Law. He is the author of several journal articles and is currently Managing Editor of Criminal Law Forum.