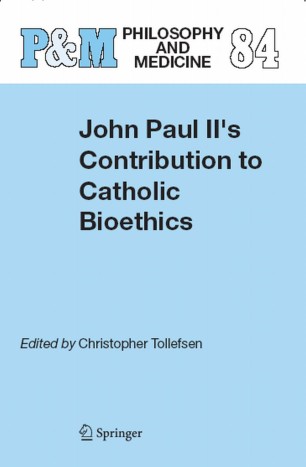 Part of the Philosophy and Medicine book series (PHME, volume 84)

Any list of the most influential figures of the second half of the twentieth century would arguably have to begin with the name of Pope John Paul II. From 1978, when he was inaugurated, to the present, over a quarter of a century later, the Pope has been a dominant force in the world, both within the Catholic and Christian Church, and in the larger international community. Among the areas in which the Pope has been of signal importance to contemporary discussion, argument, and policy has been the field of bioethics. This collection brings together for the first time in an accessible and readable form a summary and assessment of John Paul II's contribution to bioethical issues and theories. It includes discussion of the Pope's views on the dignity of the person and the sanctity of human life, and the application of these views to various difficulties in medical ethics such as abortion and embryo research, the right to health care and the problem of suffering.

Throughout, attention is paid to the way in which the Pope stands as a recognizably authentic voice for the Catholic faith in the medical arena.