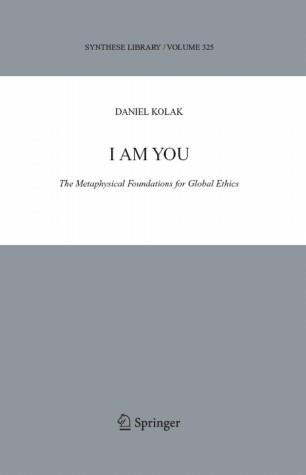 The Metaphysical Foundations for Global Ethics

Borders enclose and separate us. We assign to them tremendous significance. Along them we draw supposedly uncrossable boundaries within which we believe our individual identities begin and end, erecting the metaphysical dividing walls that enclose each one of us into numerically identical, numerically distinct, entities: persons. Do the borders between us—physical, psychological, neurological, causal, spatial, temporal, etc.—merit the metaphysical significance ordinarily accorded them? The central thesis of I Am You is that our borders do not signify boundaries between persons. We are all the same person. Variations on this heretical theme have been voiced periodically throughout the ages (the Upanishads, Averroës, Giordano Bruno, Josiah Royce, Schrödinger, Fred Hoyle, Freeman Dyson). In presenting his arguments, the author relies on detailed analyses of recent formal work on personal identity, especially that of Derek Parfit, Sydney Shoemaker, Robert Nozick, David Wiggins, Daniel C. Dennett and Thomas Nagel, while incorporating the views of Descartes, Leibniz, Wittgenstein, Schopenhauer, Kant, Husserl and Brouwer. His development of the implied moral theory is inspired by, and draws on, Rawls, Sidgwick, Kant and again Parfit. The traditional, commonsense view that we are each a separate person numerically identical to ourselves over time, i.e., that personal identity is closed under known individuating and identifying borders—what the author calls Closed Individualism—is shown to be incoherent. The demonstration that personal identity is not closed but open points collectively in one of two new directions: either there are no continuously existing, self-identical persons over time in the sense ordinarily understood—the sort of view developed by philosophers as diverse as Buddha, Hume and most recently Derek Parfit, what the author calls Empty Individualism—or else you are everyone, i.e., personal identity is not closed under known individuating and identifying borders, what the author calls Open Individualism. In making his case, the author:

* constructs a new theory of Self

The book is intended for philosophers and the philosophically inclined—physicists, mathematicians, psychiatrists, psychologists, linguists, computer scientists, economists, and communication theorists. It is accessible to graduate students and advanced undergraduates.