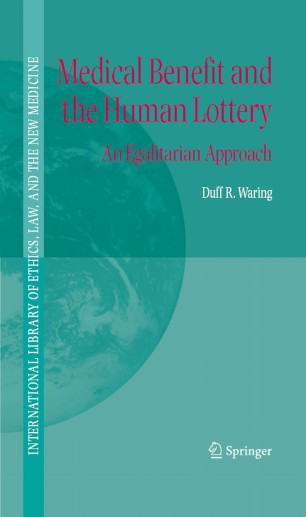 Medical Benefit And The Human Lottery

An Egalitarian Approach to Patient Selection

Part of the International Library of Ethics, Law, and the New Medicine book series (LIME, volume 22)

Bioethicists, moral philosophers and social policy analysts have long debated about how we should decide who shall be saved with scarce, lifesaving resources when not all can be saved. It is often claimed that it is fairer to save younger persons and that age is an ethically relevant consideration in such tragic decisions. Medical benefit should be maximized and final selection should aim to minimize the contaminating influence of chance. These claims are challenged by Duff R. Waring in Medical Benefit and the Human Lottery, one of the few books that attempts a sustained defence of random patient selection. This book combines ethics and political philosophy in its novel and strict egalitarian approach to patient selection for transplantable organs. Waring addresses the question of whether we should choose between lives on the basis of fair chances or best outcomes. He argues that final selection criteria should be based on fair chances that equalize opportunity as opposed to best outcomes. His defence of "hardy" egalitarianism aims to show that random selection by lottery can affirm both a common humanity and the equal value of lives. The notion of patient selection by lottery has not fared well in bioethics and has been regarded by some as a moral affront. Waring argues that a human selection lottery may be neither as crude nor as ethically anomalous as some have supposed. Indeed, it can reflect a familiar conception of equality as a political and moral ideal. This conception abstracts from many undeniable differences between patients and claims that scarce resources should be allocated on the principled assumption that each of their lives is equally worth saving. The book is also notable for its critiques of some recent utilitarian notions of medical benefit which can have an age-biased impact on elderly patients. Waring then argues against the leading, contemporary age-based approaches to patient selection. He explores the way random selection by lottery can affirm his egalitarian ethos in cases where eligible transplant candidates have each passed a threshold level of prospective medical benefit that has been set by democratic deliberation. Taming chance with a human lottery is defended as the most lucid means of ensuring equal opportunity. In so doing, Waring argues that we give the principle of equal concern and respect a radical expression: above a noncomparative threshold of medical benefit, each candidate can have an equal claim to life.