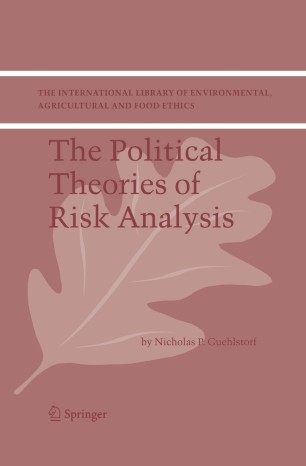 The Political Theories of Risk Analysis

Part of the The International Library of Environmental, Agricultural and Food Ethics book series (LEAF, volume 4)

The purpose of this study is to question whether liberal political theories ought to inform the way policymakers and administrators analyze risk in proposed courses of environmental practice. In order to explore the relationship of liberal theory to rational practice in environmental policy, this project examines the risk analysis used to approve the genetically engineered bovine growth hormone in American agricultural policy.

The Political Theories of Risk Analysis suggests that American environmental public policy is attempting to assess danger with an incomplete notion of utility, to eliminate the hazards of society with an inadequate contractual justification of political authority, and to publicly debate accepted levels of risk with an unfulfilled critical social theory. Because environmental risk analyses are incorrectly perceived as technically rational and socially apolitical, they result in practices that are muddled and misdirected. Making theoretical foundations explicit, however, could lead to improved practice. Public policy and administrative decisions regarding agricultural biotechnologies should and can function with more concern for democratic values.