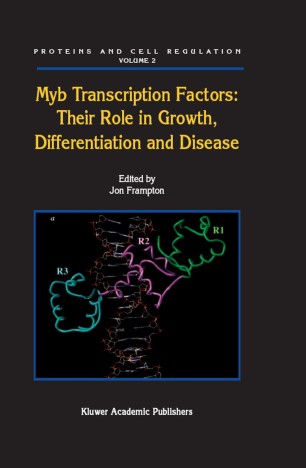 Myb Transcription Factors: Their Role in Growth, Differentiation and Disease

This volume represents the first collection of articles contributed by research leaders working on the Myb family of transcriptional regulatory proteins. In more than twenty chapters the authors discuss the range of biological processes and diverse cell types in which Myb proteins operate. Although concentrating on the three vertebrate Myb family members, homologues from lower species are also discussed because of the light they are able to shed on the evolution and function of these proteins. Individual chapters describe the involvement of Myb proteins, in particular c-Myb, in normal and diseased development and function of many tissues including haemopoietic cells, blood vessels, the gastrointestinal tract and the brain. Several chapters explore the mechanistic details of the action of Myb proteins, especially structural features, their interaction with DNA and other regulatory proteins, and the variety of genes that are regulatory targets for this group of transcription factors. This work will be of interest to those working directly in the field and also to the wider research community investigating the transcriptional regulation of development, differentiation and growth. The therapeutic potential of manipulating Myb function is also discussed making the book appealing to clinician scientists in several fields including haematology, oncology and cardiology.