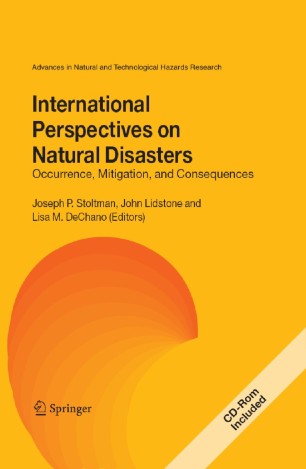 Reports of natural disasters fill the media with regularity. Places in the world are affected by natural disaster events every day. Such events include earthquakes, cyclones, tsunamis, wildfires – the list could go on for considerable length. In the 1990s there was a concentrated focus on natural disaster information and mitigation during the International Decade for Natural Disasters Reduction (IDNDR). The information was technical and provided the basis for major initiatives in building structures designed for seismic safety, slope stability, severe storm warning systems, and global monitoring and reporting. Mitigation, or planning in the event that natural hazards prevalent in a region would suddenly become natural disasters, was a major goal of the decade-long program. During the IDNDR, this book was conceptualized, and planning for its completion began. The editors saw the need for a book that would reach a broad range of readers who were not actively or directly engaged in natural disasters relief or mitigation planning, but who were in decision-making positions that provided an open window for addressing natural disaster issues. Those people were largely elected public officials, teachers, non-governmental organization staff, and staff of faith-based organizations. Those people, for the most part, come to know very well the human and physical characteristics of the place in which they are based. With that local outreach in mind, the editors intended the book to encourage readers to: 1.