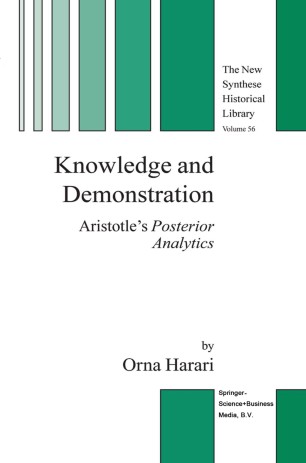 This book examines a fundamental problem in Aristotle’s Posterior Analytics: what is the role of syllogistic logic in the theory of demonstrative knowledge? The answer to this question is sought in Aristotle’s metaphysical theory and his conception of substance. This interpretation challenges the traditional interpretation that approaches Aristotle’s theory of demonstration from the standpoint of scientific practice. It is argued, in this book, that the Posterior Analytics’ main objective is to articulate the notion of knowledge, viewed here as a conceptualisation, rather than analysing the structure and methods of scientific explorations. The original interpretation offered in this book sheds fresh light on issues, such as the conceptual difference between Aristotle’s logic and modern logic, the relationship between Aristotle’s logic and Greek mathematics, and the differences between the Aristotelian and modern notions of knowledge and proof. In attempting to present a comprehensive interpretation of one of the most difficult works in the Aristotelian corpus, this book is of major importance first and foremost for Aristotelian scholars and historians of Greek philosophy; the historical character of the analysis offered here makes it relevant also to historians of Greek mathematics, historians of logic, historians of science in general, and philosophers of sciences.