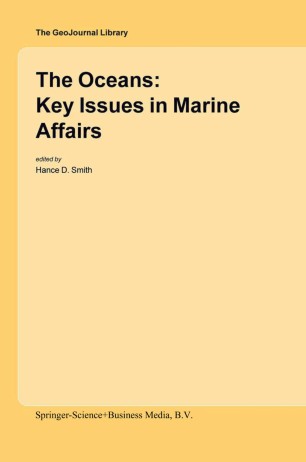 Part of the The GeoJournal Library book series (GEJL, volume 78)

HANCE D. SMITH 1. Introduction The millennium has been widely regarded as a time to take stock among other things, of the planet and its relationships with the people who inhabit it. Why this should be so is not always clear, apart from an apparent fixation with counting years. Further, the fact that the counting itself is based on the origins of the Christian religion is, for many, not of primary significance. Even if it is, counting in this way may still not be clear. And yet there are arguably sound reasons for taking stock at this time. Most obviously since the European 'industrial revolution' pressures on the environment caused by human activities have increased inexorably. At global level, over the past three decades in particular, environmental concerns have undoubtedly become a major political force. In a marine context, the Law of the Sea Convention concluded in 1982 is one manifestation of this. These pressures are in turn linked to technological and economic factors which are inextricably intertwined in any understanding of environmental impacts. Of special note are the implications of this for the exploitation of marine resources, in the periodic 'long waves' of economic expansion and contraction, each lasting for around or just over half a century, coupled with technological advances evident in the fishing and offshore oil industries in particular.