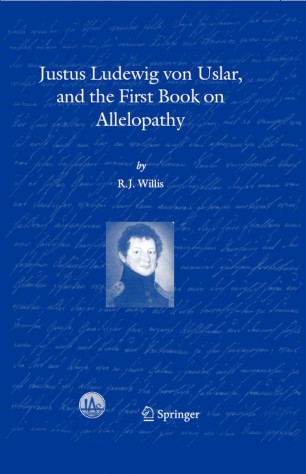 Justus Ludewig von Uslar, and the First Book on Allelopathy

Allelopathy is a fascinating and perplexing topic that concerns the chemical interactions of plants. It has profound implications in agriculture and forestry where species are grown artificially in mixture, with no evolutionary history of co-existence. The topic of allelopathy is widely credited as commencing in 1937, when the term ‘allelopathy’ was coined by Molisch. However, the concept of allelopathy has been recorded since Greek and Roman times, became extremely controversial in the first half of the 19th century, and remains so today.

This book concerns a virtually unknown treatise by Justus Ludewig von Uslar, published in 1844, which emerges as the first book entirely devoted to the concept of allelopathy. The book provides the historical background to allelopathic knowledge, from antiquity to c. 1840. It also provides for the first time a biography of Justus Ludewig von Uslar, who is best known as the first Consul-General for Hannover in Mexico, and Director of the Mexican Company, a British venture mining company. In many ways von Uslar epitomises the tradition of the gentleman scientist of the 19th century. The book then offers a full translation into English of von Uslar's rare treatise, which foreshadows many ideas current in allelopathic research.