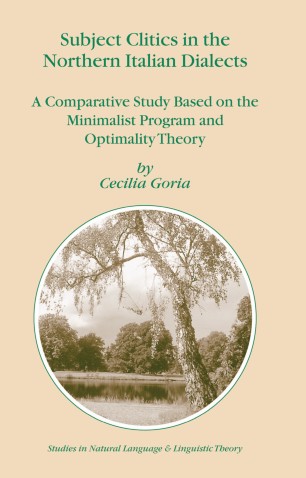 A Comparative Study Based on the Minimalist Program and Optimality Theory

1. 0 INTRODUCTION This book provides an encompassing analysis of Subject Clitics (SCLs) by giving a detailed description of these elements in two varieties of Piedmontese, a Northern Italian Dialect: Astigiano and Turinese spoken in the areas of Asti and Turin respectively. It accounts for the structural position and function of these elements inside the computational system and for their morphological and distributional properties. It also provides an empirical and theoretical comparison between Piedmontese SCLs and SCLs in other Northern Italian Dialects (NIDs). of SCLs types in the NIDs have been regarded as Since the 1980s, the majority elements of agreement, in that they contribute to the realisation of subject verb agreement by expressing features of the subject similar, in a way, to verbal inflection. Nonetheless, SCLs are not to be assimilated to verbal affixes as they exhibit different properties. Most distinctively, they can be separated from the verb by other clitic elements and, in the case of the varieties considered here, SCLs are optional in all contexts and may be omitted in coordination. A more refined identification of SCLs separates SCLs which encode agreement features from those which do not and are related to pragmatic factors, as originally observed by Beninca (1994) with respect to the clitic a in Paduano The different morphological and syntactic properties that characterise SCLs across the NIDs have justified numerous accounts which regard them as head of their own projection.