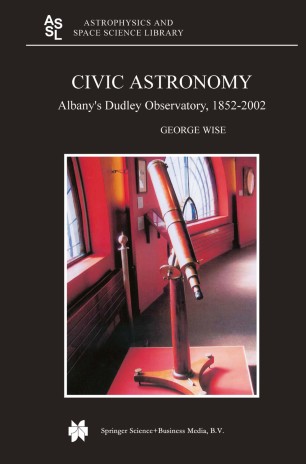 The founding of the Dudley Observatory at Albany, N.Y., in 1852 was a milestone in humanity's age-old quest to understand the heavens. As the best equipped astronomical observatory in the U.S. led by the first American to hold a Ph.D. in astronomy, Benjamin Apthorp Gould Jr., the observatory helped pioneer world-class astronomy in America. It also proclaimed Albany's status as a major national center of culture, knowledge and affluence. This book explores the story of the Dudley Observatory as a 150 year long episode in civic astronomy. The story ranges from a bitter civic controversy to a venture into space, from the banks of the Hudson River to the highlands of Argentina. It is a unique glimpse at a path not taken, a way of doing science once promising, now vanished. As discoveries by the Dudley Observatory's astronomers, especially its second director Lewis Boss, made significant contributions to the modern vision of our Milky Way galaxy as a rotating spiral of more than a million stars, the advance of astronomy left that little observatory behind.