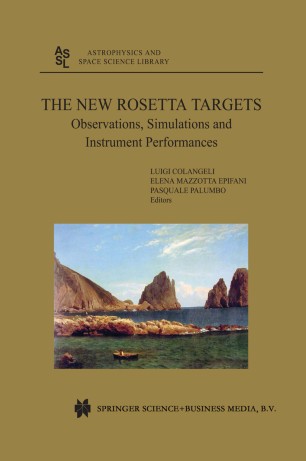 This volume collects papers presented, as invited and contributed talks or posters, at the workshop on “The NEW Rosetta targets. Obs- vations, simulations and instrument performances”, which was held in CaprionOctober13-15,2003. Morethan100scientistscoveringdi?erent ?elds, such as optical and radio astronomy, laboratory experiments and modelling of comet physics and processes, as well as several Principal Investigators of the instruments on board Rosetta, participated to this highly interdisciplinary workshop. The Rosetta mission was programmed for launch in January 2003 towards the short period comet 46P/Wirtanen and the asteroids 140 Siwa and 4979 Otawara. However, due to problems with the Ariane V launcher, the launch was postponed and the European Space Agency had to identify new mission targets, suitable for a launch window at the end of February 2004. The short period comet 67P/Churyumov- Gerasimenkowaschosenasprimarytargetforthenewbaseline, together with one or two asteroids to be selected, depending on the ?v available after the Rosetta probe interplanetary orbit insertion. After the succe- ful launch of the mission on March 2nd, 2004, the new baseline foresees a double ?y-by with asteroids 21 Lutetia and 2867 Steins, on the way towards the rendezvous with the primary target, that will be reached in 2014. The papers included in this volume cover di?erent complementary ?elds: observations of the new Rosetta targets, laboratory experiments, theoreticalsimulationofcometenvironmentandprocesses,performances of the experiments on board Rosetta spacecraft, also in view of the new mission target(s). Afterthepostponementofthemissionlaunch,comet67P/Churyumov- Gerasimenko was the subject of an intense observation campaign, - tween February and June 2003.