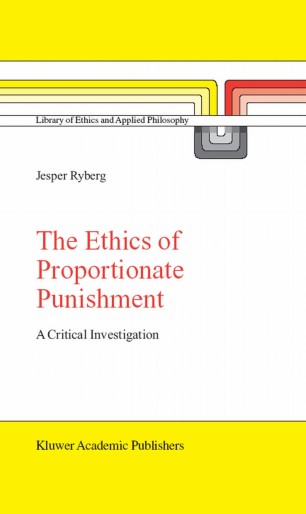 The Ethics Of Proportionate Punishment

Part of the Library Of Ethics And Applied Philosophy book series (LOET, volume 16)

The philosophical discussion of state punishment is well on in years. In contrast with a large number of ethical problems which are concerned with right and wrong in relation to a narrowly specified area of human life and practice and which hav- at least since the early 70’s - been regarded as a legitimate part of philosophical thinking constituting the area of applied ethics, reflections on punishment can be traced much further back in the history of western philosophy. This is not surprising. That the stately mandated infliction of death, suffering, or deprivation on citizens should be met with hesitation - from which ethical reflections may depar- seems obvious. Such a practice certainly calls for some persuasive justification. It is therefore natural that reflective minds have for a long time devoted attention to punishment and that the question of how a penal system can be justified has constituted the central question in philosophical discussion. Though it would certainly be an exaggeration to claim that the justification question is the only aspect of punishment with which philosophers have been concerned, there has in most periods been a clear tendency to regard this as the cardinal issue. Comparatively much less attention has been devoted to the more precise questions of how, and how much, criminals should be punished for their respective wrong-doings. This may, of course, be due to several reasons.

From pre-publication reviews:
`[This] book will (or at least, should) raise substantially the sophistication of discussion of proportion in punishment. Very seldom do I get to review a book before publication that I want to read again - and more carefully...The concept of proportional punishment, the manuscript's central concern, has received far less attention than it deserves. Certainly no one (at least to my knowledge) has subjected this concept to anything like the author's careful and detailed criticism. The manuscript is well written and cogently argued, and constitutes an important and original contribution to philosophical writings concerned with the morality of punishment.'
Buy options