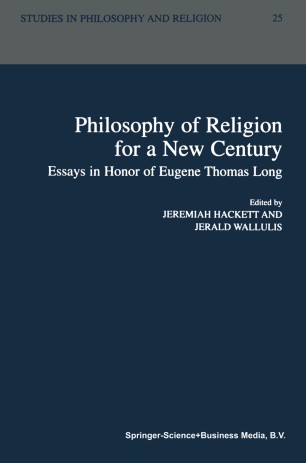 Philosophy of Religion for a New Century

Part of the Studies in Philosophy and Religion book series (STPAR, volume 25)

Philosophy of Religion for a New Century represents the work of nineteen scholars presented at a conference in honor of Eugene T. Long at the University of South Carolina, April 5-6, 2002.
This volume is a good example of philosophy in dialogue; there is both respect and genuine disagreement. First, an account of our present situation in the Philosophy of Religion is given, leading to a discussion of the very idea of a 'Christian Philosophy' and the coherence of the traditional concept of God. The implications of science and a concern for the environment in our concepts of God are carefully examined. A discussion follows on the possibility of speech about God and silence about God. Since much of modern European philosophy is concerned with the `Death of God' theme, the positions of Nietzsche and some of his twentieth-century interpreters are presented. There are presentations on Feminist Approaches to Philosophy of Religion, and Comparative Religion is examined in relation to cultures and the demands of rationality. The volume concludes with a critical dialogue on the relation of Religious Discourse to the Public Sphere.
Developing global awareness has led to significant change in the Philosophy of Religion. One-dimensional approaches have given way to honest dialogue. The traditional boundaries between the secular and the religious have shifted, and new approaches to traditional problems are required. This volume presents examples of these new approaches.