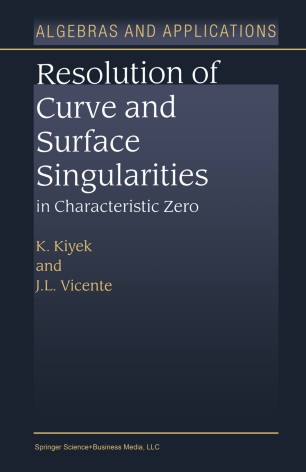 Resolution of Curve and Surface Singularities

Part of the Algebras and Applications book series (AA, volume 4)

The Curves The Point of View of Max Noether Probably the oldest references to the problem of resolution of singularities are found in Max Noether's works on plane curves [cf. [148], [149]]. And probably the origin of the problem was to have a formula to compute the genus of a plane curve. The genus is the most useful birational invariant of a curve in classical projective geometry. It was long known that, for a plane curve of degree n having l m ordinary singular points with respective multiplicities ri, i E {1, . . . , m}, the genus p of the curve is given by the formula = (n - l)(n - 2) _ ~ "r. (r. _ 1) P 2 2 L. . ,. •• . Of course, the problem now arises: how to compute the genus of a plane curve having some non-ordinary singularities. This leads to the natural question: can we birationally transform any (singular) plane curve into another one having only ordinary singularities? The answer is positive. Let us give a flavor (without proofs) 2 on how Noether did it • To solve the problem, it is enough to consider a special kind of Cremona trans­ formations, namely quadratic transformations of the projective plane. Let ~ be a linear system of conics with three non-collinear base points r = {Ao, AI, A }, 2 and take a projective frame of the type {Ao, AI, A ; U}.