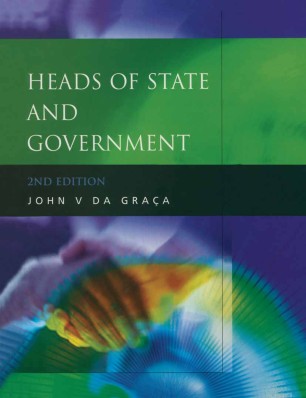 Heads of State and Government

Macmillan published the first edition of this text in 1985. It is a detailed reference to world leaders, monarchs, presidents and their equivalents, executive leaders plus other positions with authority vested in them; heads of ruling communist parties, military junta heads and some leaders with no formal post, but who wield supreme authority. This text is a reference to leaders, past and present, of the countries of the world. The second edition updates the first and includes the far reaching political changes which have taken place in Eastern Europe and the emergence of new states. The scope of the book has been broadened to include more international organisations, more regional government leaders, more governments in exile and colonial governors of the twentieth century.

JOHN DA GRAÇA is deputy Director of the Texas A&M University Research Center in Weslaco, Texas. He has a doctorate in plant pathology and has taught at the leading research institutes in the USA, Israel and Spain. To balance his interest in science, he developed a liking for history and geography at school, and began collecting information on government leaders. In 1985, this was published by Macmillan under the title Heads of State and Government.