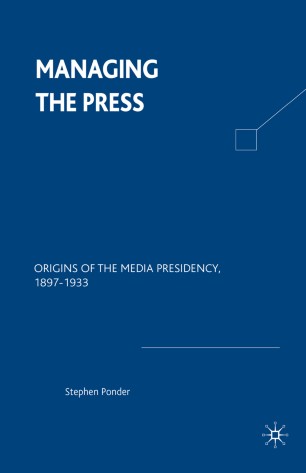 Managing the Press re-examines the emergence of the twentieth century media President, whose authority to govern depends largely on his ability to generate public support by appealing to the citizenry through the news media. From 1897 to 1933, White House successes and failures with the press established a foundation for modern executive leadership and helped to shape patterns of media practices and technologies through which Americans have viewed the presidency during most of the twentieth century. Author Stephen Ponder shows how these findings suggest a new context for contemporary questions about mediated public opinion and the foundations of presidential power, the challenge to the presidency by an increasingly adversarial press, the emergence of 'new media' formats and technologies, and the shaping of presidential leadership for the twenty-first century. Managing the Press explores the rise of the media presidency through the lens of the late-twentieth century, when the relationship between the President and the press is relevant to more important issues than ever before in the context of American politics.