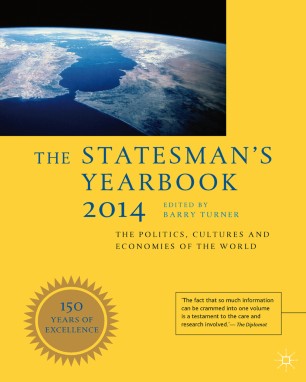 The Politics, Cultures and Economies of the World 2014

Part of the The Statesman’s Yearbook book series (SYBK)

Now in its 150th edition, The Statesman's Yearbook continues to be the reference work of choice for accurate and reliable information on every country in the world. Covering political, economic, social and cultural aspects, the Yearbook is also available online for subscribing institutions: www.statesmansyearbook.com.

Barry Turner is the seventh editor in the 150-year history of The Statesman's Yearbook. He has a Ph.D. in Political History and has been a full-time writer for 30 years. He has worked as a journalist and broadcaster in the field of politics, biography, travel and education, and is the author of over 20 books. He is a regular contributor to The Times as a book reviewer and serializer.

'While the Yearbook is primarily a reference book, to be consulted when you would like to find out the population of a particular country, the name of its President, or the number and size of its religious denomination, it is also a delight to leaf through it, discovering unexpected facts ' - The Times Literary Supplement

'Even in an increasingly interconnected world, there is still a need to know about the national jurisdictions that make up the international state system, and this remains the great strength of the Yearbook.' - The Times Literary Supplement

'Its wealth of information is arranged in a logical and consistent manner.' - The Times Literary Supplement

'A delight to leaf through discover unexpected facts about some of the more obscure as well as some of the less obscure nations. Its wealth of information is arranged in a logical and consistent manner there are also splendid world maps and flags of the world even more important, however, is the Yearbook's reliability' - The Times Literary Supplement

"The fact that so much information can be crammed into one volume is a testament to the care and research involved." - The Diplomat

"The most comprehensive guide to world political and economic affairs." - Robert Thomson, Publisher, Dow Jones and The Wall Street Journal

"The most convenient and reliable starting point for information on International affairs. Its coverage is unparalleled for a one-volume resource, and it has never let me down." - George J. Mitchell, American special envoy to the Middle East

"A miracle of compression: the key facts about the entire world crisply collated in [its] tightly edited pages. It is an essential desktop guide for anyone who needs to think, write or talk about the nature and future of our unimaginably odd and constantly surprising planet." - Godfrey Smith, The Sunday Times

"All you need to know about the population of various states and countries, officials, exports, constitutions, governments, diplomatic representatives, religion, finance and basic histories." - The New York Times

"Full of invaluable material about every country in the world. For someone like me who spends much of my time travelling, it is an invaluable treasure trove. I would warmly recommend it to other readers." - The Right Honourable Christopher F. Patten, CH, Chancellor of Oxford University, UK

"Should be in every office which is concerned with world trade and, indeed, in every school which produces the future traders. It is an essential tool of all global thinking." - Geographical Magazine

Bestselling Reference title "Originally designed for statesmen but now used by anyone needing information on the politics, cultures, and economies of the world, this yearbook is one of the longest-running annual publications in history." Library Journal

"The information this book contains renders it indispensible." - The New York Times, 1874