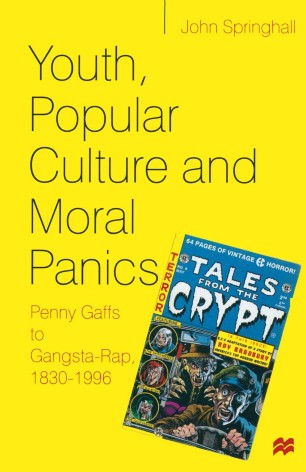 The international controversy (highlighted in Britain by the Bulger case) over the relationship between video nasties and crime is one that has a long prior history. Do books, films or magazines create a corrupting environment which encourages crime and moral decay?
Dr. Springhall has written a highly perceptive and entertaining account of how commercial culture in Britain and America has been viewed, since its inception during the Industrial Revolution, as a force likely to undermine national morals. There has been wave after wave of scares: from the Victorian penny gaff theatres and penny dreadful novels to Hollywood gangster films, and American horror comics. A final chapter refers to video nasties, violence on television, 'gansta-rap' and computer games, each in turn playing the role of folk devils which must be causing delinquency. Why particular issues suddenly galvanize public attention, and why so many people have associated delinquency with entertainment, form the fascinating subjects of this groundbreaking book.

JOHN SPRINGHALL is Reader in History at the University of Ulster, Coleraine.