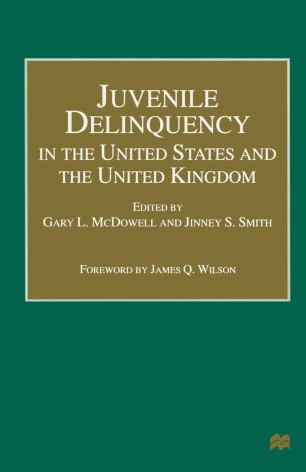 This volume about juvenile delinquency in the United States and United Kingdom includes a foreword, nine chapters organized in three parts, and an afterword. Chapters 1 and 2 in Part I describe juvenile delinquency in both countries and the urgency of the current crisis. Chapters 3 to 6 in Part II deal with the two nations' juvenile justice systems, focusing on structural and ideological obstacles preventing reform. Presented in the final chapters in Part III are suggestions for reform in school, and juvenile justice setting that recognize the importance of character in causing delinquency.

RONALD P. CORBETT, JR Deputy Commissioner of the Massachusetts Probation Department DAVID P. FARRINGTON Professor of Psychological Criminology at Cambridge University LAWRENCE A. GREENFELD Deputy Director, Bureau of Justice Statistics, the Statistical arm of the United States Department of Justice MURREEN A. HENNEBERG previously Chief of Planning, Management and Budget in the Bureau of Justice Statistics EDWIN MEESE III Ronald Reagan Distinguished Fellow in Public Policy at The Heritage Foundation PATRICIA MORGAN Sociologist specializing in Criminology and Family Policy, and Senior Research Fellow on the Family at the Institute of Economic Affairs Health and Welfare Unit in London RALPH A. ROSSUM Henry Salvatori Professor of American Constitutionalism at Claremont McKenna College and a Member of the Faculty of Claremont Graduate University ANDREW RUTHERFORD Professor of Law and Criminal Policy at Southampton University in the Faculty of Law JONATHAN SACKS Chief Rabbi of the United Hebrew Congregations of the Commonwealth since 1991 MARY TUCK was Head of the Home Office Research and Planning Unit from 1984 until her retirement in 1990