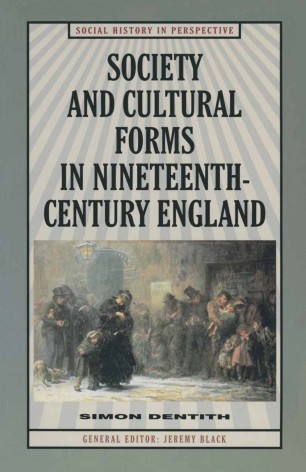 The massive transformation of British society in the course of the nineteenth century is a commonplace of historical description. The transition from an industrialising but still predominantly agricultural society, with many of its traditional, vertically organised forms of social organisation still intact, to a predominantly urban, class-divided and recognisably modern society remains one of the striking transformations of social history, the prototype indeed for much of human history in the twentieth century. The simultaneous transformation of Britain, from one imperial power among others, to the most powerful imperium in history, is equally important, though the cultural manifestations of this imperial situation have been less intensively studied.
The social and cultural changes that accompanied the economic and political changes were no less remarkable - from a society of minority literacy to mass literacy; from an oligarchical social order ruled by a tiny elite, to one with some genuine democratic features where the rule of that elite was at least profoundly challenged; from a time when women were being excluded from the public sphere and the labour market, to the age of the New Woman and a return to the labour market in vastly different circumstances.
The book will seek to map the cultural history of nineteenth century British society in the light of these extraordinary transformations.

SIMON DENTITH is Reader in English at Cheltenham and Gloucester College of Higher Education.