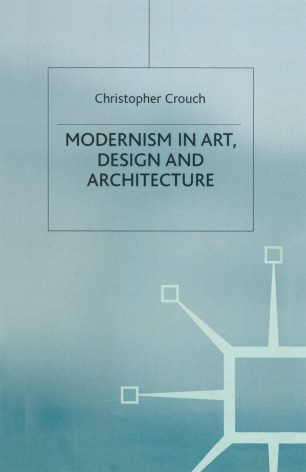 Modernism in Art, Design and Architecture

This book introduces the ideas of Modernism and their post-modern evolution in a clear and engaging argument that links the development of visual culture to the social and political conditions in which it is produced. It established the key critical terms of reference before taking the reader through the evolution of this century's visual culture in a wide-ranging and approachable way.

It was the cultural processes of the Enlightenment and the subsequent development of industrial cultures that informed the early ideas of Modernism and gave us our world of rapid communication, fast cars and cities filled with skyscrapers and consumer goods. It also gave us a world in which environmental disaster looms and there the cultural legacy of European colonialisation has still to be unravelled. The post-industrial, post-modern world of the internet and virtual reality is challenging the mono-culture of Modernism, and celebrates cultural diversity and multiplicity. But our new age has cultural problems that also need unpacking - in a world of many voices, whose voice now directs visual culture? The much lauded individual's or that of trans-national corporations?

Art, design and architecture do not exist in a vacuum, they are formed by the cultures from which they emerge. This book examines the way in which visual culture reflects its conceptual and physical origins in elite, and mass, cultural practices.