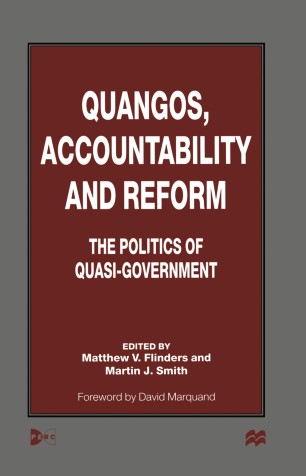 The Politics of Quasi-Government

Quangos are now a permanent layer of governance in Britain. This collection challenges the stale debate which portrays quangos as inherently undemocratic. Whilst accepting that problems exist this book accepts that quangos are here to stay. Through a collection of chapters by practitioners, politicians and academics it recognises both the pitfalls and potential offered by these bodies. The book therefore illuminates a new perspective on the debate which for the first time highlights the democratic possibilities of quangos. The book advances and clarifies this complex debate by examining the British reform debate in an international context, and blends theoretical analysis with illuminating case studies from Quango Chief Executives and concrete proposals for reform.

'The debate about quangos in Britain is curiously unreal, focusing as it has mostly on how many there are and how much 'sleaze' can be detected among quangocrats. The press are now sniffing around for political patronage and irregularities in quangoland under the new Labour government. This collection of essays marshalled by Matthew Flinders and Martin Smith, provides an invaluable counter-balance to the quango-hunting approach that has dominated the debate since the mid-1970s. They begin by acknowledging the value and virtues of quangos and the complexity of the issues which surround them. They have collected a remarkably broad and sane group of quango executives and academics to share their experience and broaden our grasp of those issues, and the section on international experience of quangos and their governance is a useful reminder that quangos exist in all liberal democracies, even if not with such an exotic and odd names as here. Odd, too, are Britain's informal, almost careless, processes for establishing quangos, making them accountable, appointing members and securing a proper working balance between hands-on control and arm's-length relations, and between public and private. If Labour wants to get the balance right, then the various ministers who are now dealing separately with their own collections of quangos would do well to sit round a table together and read this book, and especially perhaps Labour MP Tony Wright's proposals on patronage. But everyone should read the blistering account of life at the Prison Department under the heel of the Home Office by Brian Landers, the former finance director. Here in microcosm is a vivid portrait of significant failings in Whitehall and Westminster and a crisp set of ideas for reform.' - Stuart Weir, Director, The Democratic Audit, Human Rights Centre, University of Essex