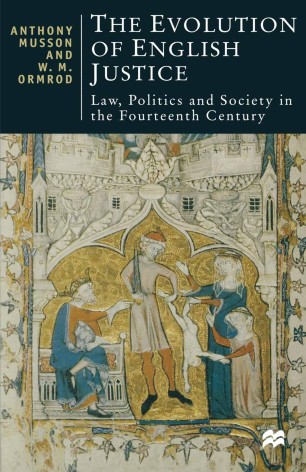 The Evolution of English Justice

Law, Politics and Society in the Fourteenth Century

The importance of the fourteenth century for the development of English law has long been recognised. The shocks and challenges of that period - the murder of the incompetent Edward II, Edward III's ever escalating military demands for the war in France and the unparalleled disaster of the Black Death - gave English society a trauma that found its ultimate expression in Lollardy and the Peasants' Revolt. Out of this ferment came the evolution of a system of justice still substantially recognisable today. This key theme for students of late medieval England has often been made needlessly difficult by the rarefied nature of most books available on the subject. The aim of this book is to present in lucid and approachable terms the main outline of the debate and the different schools of thought, and to suggest the best ways by which students can understand a crucial subject and how this helps illuminate many other aspects of English society during the reigns of Edward II, Edward III and Richard II.

ANTHONY MUSSON is a freelance historian and an associate of the Centre for Medieval Studies at the University of York.

W.M. ORMROD is Professor of Medieval History at the University of York.