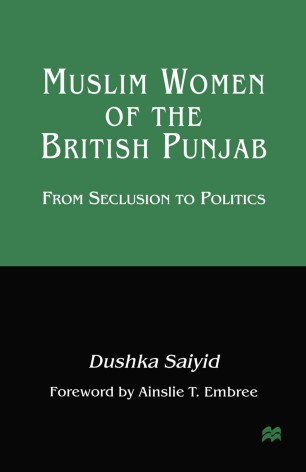 Muslim Women of the British Punjab

From Seclusion to Politics

This is a study of the forces which brought about a change in the status and position of the Muslims of Punjab during the British rule of the province, from 1849, up to its independence in 1947. It examines the role of the government, reformers and political leaders in bringing about a transformation in their position. It is a useful study for understanding the predicament of the modern day South Asian Muslim women, who sometimes emerge in powerful political positions in an otherwise conservative society.

DUSHKA SAIYID is Assistant Professor at the Department of History, Quaid-I-Azam University, Islamabad. She was educated at the London School of Economics and Political Science and Columbia University, New York. The author has been teaching at the Quaid-I-Azam University, Islamabad, since 1979, where she is currently Assistant Professor of History. Her publications include: Exporting Communism to India: Why Moscow Failed, and Islamabad: National Institute of Historical and Cultural Research, 1995.