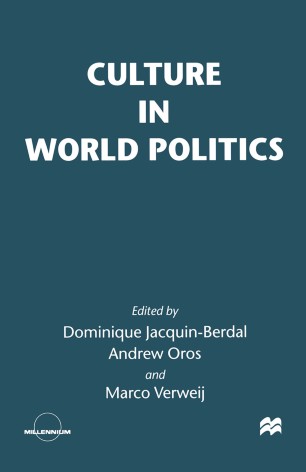 World politics can be viewed as the patterns of cooperation and conflict between groups of people with different cultural backgrounds. Surprisingly, though, for several decades the topics of culture in international relations has been largely ignored. Only recently an increasing interest has (re-)emerged in how world politics is affected by cultures, i.e. by collectively shared perceptions, norms and beliefs. Culture in World Politics contributes to this development by presenting a variety of ways in which the roles of cultures in world politics can be studied. A major aim of the book is to highlight alternative ways of thinking about the effects of culture on international relations, and to stimulate discussion on the relative merit of these various approaches. The book also shows the relevance of cultural studies for understanding two areas often assumed to be free of cultural influences: international violence, and the international political economy. The contributions not only include insightful theoretical discussions, but also show how illuminating empirical analyses can be undertaken with the help of cultural theories.

DOMINIQUE JACQUIN-BERDAL is a Research Student in the Department of International Relations at the London School of Economics, London.

ANDREW OROS is a PhD student and Fellow of the Faculty in the Department of Political Science at Columbia University.

MARCO VERWEIJ is a Researcher and PhD student in the Department of Social and Political Sciences, European University Institute.