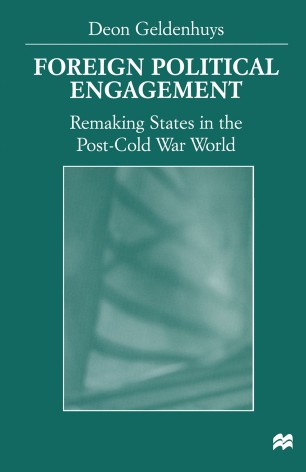 The 1990s have witnessed several major external initiatives to reshape the domestic political arrangements of countries. Because these have been collective foreign ventures, usually with the active collaboration of the target countries, the term intervention is ill-suited. Instead, Deon Geldenhuys introduces the notion of foreign political engagement to describe international attempts at remaking countries in the image of the West. South Africa, Kenya, Somalia, Russia, Cambodia, El Salvador and Haiti serve as case-studies to demonstrate this important theoretical rethinking of international relations today.

DEON GELDENHUYS is Professor of Political Studies at Rand Afrikaans University in Johannesburg. He holds an MA from the University of Pretoria and a PhD from Cambridge University. He has lectured in Politics at the universities of Pretoria and Stellenbosch and served as director of research at the South African Institute of International Affairs. He has been a professor of Political Studies at the Rand Afrikaans University in Johannesburg since 1981, specializing in international relations. He has published three books, including Isolated States: A Comparative Analysis.