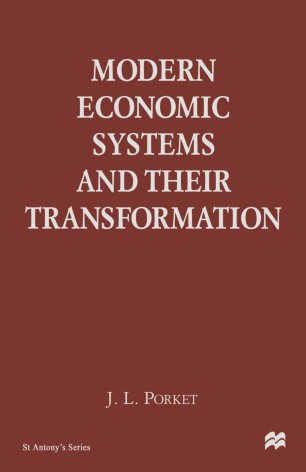 Modern Economic Systems and their Transformation

Societies, whether traditional or modern, experience tension between spontaneity (individual freedom) and control (regulation). Consequently, economies as a subsystem of society experience it too. More specifically, they experience a tension between economic individualism and economic collectivism, which in modern economies revolves around the role of the state in the economy. Since the collapse of communism, this tension has manifested itself not as a tension between market capitalism and command socialism but as a tension between the free market and the interventionist variants of market capitalism. Although currently economic and political liberalization is in evidence worldwide, not only in post-communist societies, its outcome remains uncertain. Liberal democracy in the sense of democratic politics and free-market economics has not triumphed hitherto, and also its future is far from assured. The end of history is not in sight.

J.L. PORKET is a Senior Associate at St Antony's College, Oxford. He specialises in economics and economic sociology. He is Czech by origin, and left Czechoslovakia in 1969. He was formerly a research fellow at the Prague School of Economics. He has published in both Czech and English on communist systems in Europe and the Soviet Union and post-communist transformations. He has also lectured at Brunel University.