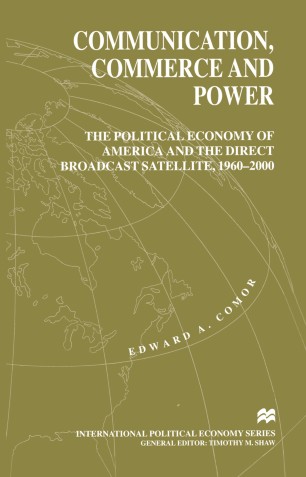 The Political Economy of America and the Direct Broadcast Satellite, 1960-2000

In this history of US-based direct broadcast satellite developments, the United States and other nation-states are shown to be the ultimate arbiters of their ongoing histories. In making this now unfashionable argument, Edward A. Comor directly challenges recent academic work that tends to privilege global processes over national, and argues that the contemporary world order is being shaped primarily by transnational rather than nation-state-based forces. In testing this orientation with empirical research on US foreign communication policy since 1960, Communication, Commerce and Power compels academics and policy makers to rethink commonplace assumptions about the characteristics and potentials of the contemporary and future international political economy.

Edward A. Comor is Assistant Professor in the School of International Service at the American University, Washington, DC.

'It represents a completely new approach to disciplinary scholarship within the field of international communications that can only serve to give the field greater academic weight and integrity.' - Philip M. Taylor, University of Leeds

'The book provides a thorough examination of the role played by the US in the establishment of an international regime characterised by free flow of information principles institutionalised through free trade goals...relevant not only to the academic reader interested in theoretical approaches to understand how the world order is shaped, but also to regulators and policy-makers interested in the evolution of DBS from a political economy perspective.' - Luiz Fernando Ferreira Silva, Telecommunications Policy

'Edward A. Comor's book makes an important contribution to the rethinking of world politics, transcending the conventional cleavage between comparative and international politics and focusing on culture and communications hitherto relatively neglected. He illustrates cogently the complex interplay of corporate interests linked to new technologies, and the way in which the American state restructured itself in order to shape a new international regime that would enhance the ability of corporate capital to expand on the global level. This is the kind of detailed study of a particularly strategic sector that is essential to building a broader theory of the changing global order.' - Robert W. Cox, Professor Emeritus of Political Science and Social and Political Thought, York University, Ontario