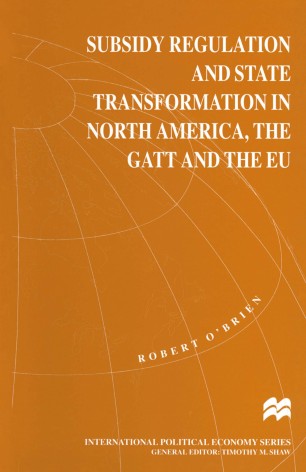 Subsidy Regulation and State Transformation in North America, the GATT and the EU

Recent international subsidy regulation is contributing to a dual transformation of the state. The state is increasingly liberal as expenditure is channelled into particular activities and it is less sovereign as key decision-making authority is transferred to international institutions. Subsidy conflicts emerge as the attempts by states, firms and social forces to adapt to an increasingly global economy collide with variations of liberal development models. This study examines the distinct subsidy arrangements in North America, the GATT and the European Union to highlight this change in state structure and behaviour.