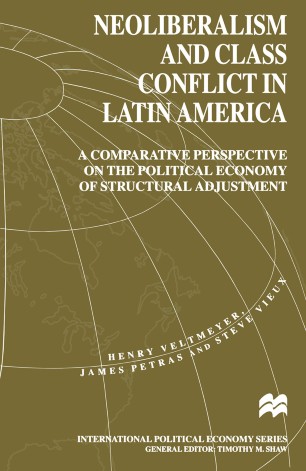 A Comparative Perspective on the Political Economy of Structural Adjustment

The 1980s in Latin America saw the implementation of a sweeping programme of economic reforms, either imposed as a condition for securing new loans or to embrace the neoliberal doctrine of structural adjustment, the ideology of a newly formed transnational capitalist class. However, the structural adjustment programme also generated widespread resistance, especially from within the popular sector of civil society. This book analyses both the politics of the adjustment process and the political dynamics of this resistance in Latin America.

JAMES PETRAS is Professor of Sociology and Latin American studies at Binghamton University. He is the author of over 30 books dealing primarily with Latin America. His most recent book is titled Neoliberalism and Class Conflict in Latin America (Macmillan 1997). He has published over 250 articles in professional journals including the British Journal of Sociology, the American Sociological Review and the Journal of Peasant Studies. He has lectured at major universities in Europe, Latin America, the Caribbean, Australia, Asia and North America. He has contributed essays to Le Monde Diplomatique, El Mundo, the Guardian and La Jornada.