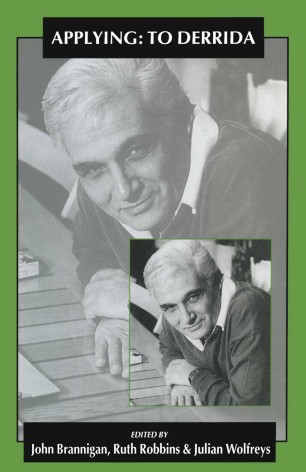 Striking out from a number of new headings and in a number of new directions each of the essays in this collection pushes at the borders of their topics, disciplines and ways of thinking, providing innovative and inventive insights into the work - and application - of Jacques Derrida on a diverse range of themes including Irish identity, communication, ethics, love, tele-technology, Victorian studies, the limits of philosophy, translation, otherness and literature, demonstrating that, today, despite repeated accusations over recent years that the work of Derrida has become passe, there is more vitality and spirit in engaging with the writings of Derrida than ever before.

Julian Wolfreys is Professor of Modern Literature and Culture at Loughborough University, UK. He was previously Professor in Literature at the University of Florida, USA. His teaching and research is concerned with 19th- and 20th-century British literary and cultural studies, literary theory, the poetics and politics of identity, and the idea of the city. He is the series editor of Transitions and has written many course texts for Literature students, notably The English Literature Companion.