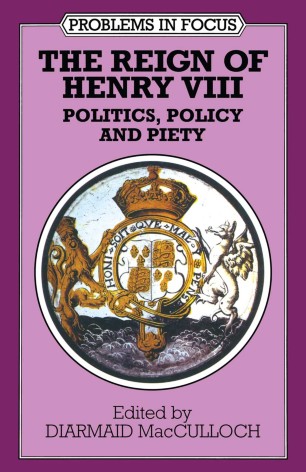 The Reign of Henry VIII

This collection of essays by leading scholars and researchers in early Tudor studies provides an up-to-date discussion of the politics, policy and piety of Henry VIII's reign. It explores such areas as the reform of central and local government, foreign policy, relations between leading politicians, life at Court, Henry's first divorce and the break with Rome, literature and the government's exploitation of it, and the growth of evangelical religion in Henry's England. Particular consideration is given to the controversies which have arisen about the reign among modern historians, and there is an effort to assess the personality of Henry himself.

DIARMAID MACCULLOCH has held Research Fellowships from Churchill College, Cambridge, and the Leverhulme and Wingate Trusts. He lectures in the Department of Theology and Religious Studies in Bristol University and also writes and lectures independently.