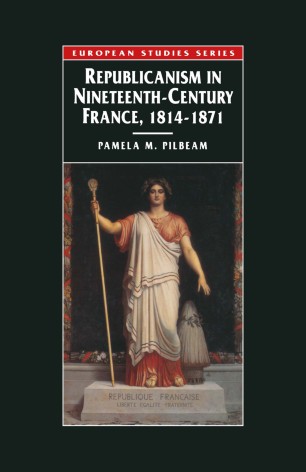 This book is a fascinating survey of nineteenth-century republicanism, the first of its kind this century. It investigates why it was that although France was one of the first countries in modern Europe to become a republic in 1792, it was nearly a hundred years before a republic was acceptable to the majority. Pamela Pilbeam suggests that republicanism was a witch's brew of Enlightenment rationality, bloody memories and conflicting socialist expectations. The book concludes that the successful republic of 1871 used the rhetoric of democracy to conceal persistent elitism.

PAMELA M. PILBEAM is Reader in Modern European History at Royal Holloway and Bedfore New College, University of London. She has also taught at the universsities of Toronto, York (Ontario) and in 1993, at the University of British Colombia. She is author of Middle Classes in Europe, 1789-1914; The 1830 Revolution in France, Themes in Modern European History, 1780-1830 (Routledge) and is currently preparing a book on The Early Socialists and the Social Question in Nineteenth-Century France.