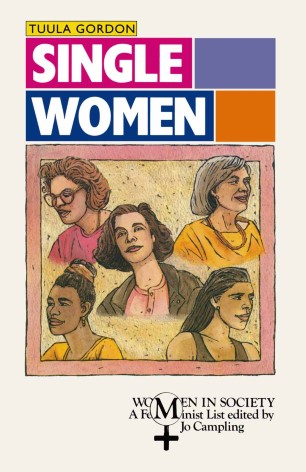 Historically women have been defined in relation to men. Single women have been represented both as 'old maids' who could not get a man and as 'city-singles' who do not want a man. Both stereotypes potentially marginalise single women in family-centred societies. But there is also increasing diversity in family and household formations. This book explores both continuities and changes in the position of single women (unmarried and divorced) in London, San Francisco Bay area and Helsinki, Finland. The 72 women interviewed are a heterogeneous group in terms of occupation, ethnic grouping, sexual orientation etc. Their struggles to establish autonomy and independence are analysed: single women are learning a 'new script'. Simple generalisations are avoided, and the diversity of single women is emphasised. The theoretical concerns of the book centre on 'individual' and 'individuality' as gender-specific concepts.

TUULA GORDON is Professor in Women's Studies and Social Sciences in the Department of Women's Studies, University of Tampere. She obtained her sociology degree at London School of Economics and her doctorate at the University of London. She has also taught at the University of Helsinki. She is the author of Single Women: On the Margin, Feminist Mothers and Democracy in One School? Progressive Education and Restructuring, and co-editor of Unresolved Dilemmas: Women, Work and the Family in the United States, Europe and the Former Soviet Union.